Quieter and higher reliability have resulted from fitting an ABB variable-speed drive to a damper tester used in the upgrade and refurbishment of railway equipment.

Wabtec Rail Ltd, of Doncaster, refurbishes the dampers used on the front and rear of railway engines and rolling stock to reduce the shock loads when vehicles come together. The company tests around 560 dampers a week, ranging in size from 30 to 120 cm in length.

A critical part of the operation is carried out at the railway damper test facility, where each damper is subjected to compression testing at set frequencies to ensure it can be fitted to a carriage or engine. The test facility consists of a motor connected through a gearbox to a cam, which provides the lateral movement to compress the damper at the selected speed. A potentiometer allows the operator to vary any of the set speeds for special applications. Test results for each damper are recorded on a chart recorder and data logger.

The original set-up used a 15 kW DC motor controlled by a frequency converter, with closed loop speed control through a mechanical belt and drive system. Both the drive and motor were around 35 years old and were nearing the end of their lives. The DC motor failed and as it was no longer supported by spares and was becoming uneconomical to repair, the company asked ABB Drives Alliance member Inverter Drive Systems (IDS) to examine the application and suggest a replacement solution.

Because no damper can leave the facility without going through the testing regime, IDS needed to rapidly resolve the problem and get the test facility working. 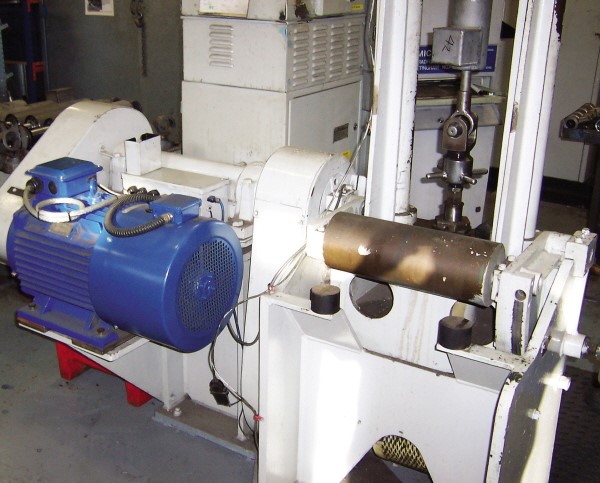 IDS recommended scrapping the existing motor and drive, replacing them with an 18.5 kW AC motor and an ABB ACS800 variable-speed drive. The motor was a standard AC squirrel-cage motor fitted with an incremental encoder to provide speed feedback and force-vented to ensure the motor is cooled at lower operating frequencies. Although the majority of tests require no more than 9 kW, the rating of 18.5 kW ensures it can be used to test the most demanding dampers.

The drive was programmed and installed so that the existing controls were integrated with the variable-speed drive, with the speed setting of the motor selected via an input to the drive. This meant that operators familiar with the test equipment were able to continue with approved test standards, minimising the need for re-training or familiarisation with new procedures. It was decided to retain all of the existing mechanical drive train, operator controls and logging equipment.

The application took a week to install, with Wabtec undertaking some of the mechanical work itself.

Wabtec benefits through a more accurate speed control, the ability to reach the set point speed instantaneously, higher reliability and little maintenance. The system can also be upgraded to allow networking or the addition of an electronic data logger.

Dave Williams, Team Leader of the damper shop, says: “We find the new motor a lot quieter than the old one and we have not had any trouble with the new application since it was installed.”

ABB is a leader in power and automation technologies that enable utility and industry customers to improve performance while lowering environmental impact. The ABB Group of companies operates in around 100 countries and employs about 150,000 people.