IDS Area Sales Manager, Phil Nightingale explains how you can save money on the running costs of your air compressors. 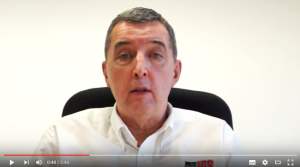 Have you ever noticed your air compressor makes 2 different noises? It is louder when it is on load and making air for your factory and slightly quieter when the pressure vessel has enough air. During the quieter phase the motor inside is still running at full speed, consuming power, however, no air is produced. In fact the motor still uses about half the rate of power. When you think about it, this is wasted power because you get nothing out of it except noise. The motor has to keep running because switching it on and off every few seconds will damage the motor. A pressure sensor tells the compressor when and when not to make air. Typically, a compressor makes air when the pressure drops to about 6.5 bar and stops making air when the pressure gets to around 7 bar. Each installation has its own unique figures.

What this tells us is that your compressor will happily run somewhere just above the pressure that triggers air production. This is what happens when a variable speed drive is used to control an air compressor. The variable speed drive, monitors the air pressure in the pressure vessel and slows the motor down so the compressor is always on load, just not at the same rate as before. Slowing the motor down means that it costs less to run and uses power more efficiently. In addition, the compressor is quieter and as the motor runs more slowly, it should last longer. In certain operations we can even put the compressor to sleep, for example during quiet periods of production.

What this means in Practice

Fitting a variable speed drive to an air compressor can save up to 30% of the power used and can payback the investment in as little as 12 months, depending on how large the compressor is. Typically, a 37 kW compressor pays back in around 18 months.

If this kind of energy and monetary saving appeals, then book a free energy saving survey here or call our team on 0115 944 1036 or email [email protected]