Condenser Fans Controlled by an Inverter 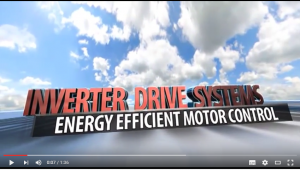 You can see quite clearly on this video clip, the affect of inverters on these four banks of condenser fans. Each bank is a condenser for a separate chiller circuit and each bank of five fans are controlled by one inverter. Each inverter controls the cooling of the gas, condensing it to a liquid, keeping the head pressure constant at its optimum value in the chiller pipework.

This control saves energy not only on the cooling fans but more importantly on the large power compressor motor and avoids the inefficient ‘cycling’ inherent with alternative on-off control of the fans.

What this video shows is the fans speed on each bank of fans is different, each cooling just enough to keep the head pressure constant.

That kind of control is achieved by using inverters. Inverter Drive Systems have been reducing energy costs and optimising the motors that drive fan applications for more than 20 years. We are an ABB AVP and are able to provide an Energy Efficiency Motor Audit to detail energy saving potentials