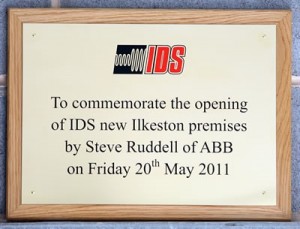 Inverter Drive Systems (IDS), celebrated the opening of their new premises in Ilkeston, Derbyshire, with an open day, and a commemorative plaque was unveiled by Steve Ruddell of ABB on Friday 20th May 2011.

1924 – Blaise’s grandfather, Arthur Ford set up a business to connect Nottinghamshire villages to the new grid. He met a man called Wilson who had the Butlin’s dodgem car motor repair contract – they set up Wilson Ford Ltd… Blaise took over the management of Wilson Ford in 1991. Throughout the 90s the Ford Group grew to a turnover of £15 million. 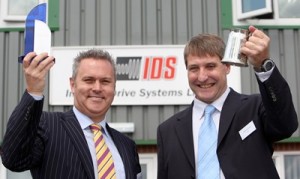 2010 – IDS moved to their new premises in Ilkeston Derbyshire at the end of 2010 and continues to grow and thrive, saving their customers large amounts of electrical power including Boots, Severn Trent, McDonald’s, Anglian Water, UK Coal, British Sugar …