A fruit juice manufacturer in the east of England has the potential to substantially reduce their energy consumption and the associated costs by fitting ABB Inverters (variable speed drives) across its manufacturing operation.

These potential savings were discovered during a free Energy Efficiency Motor Audit.

The inverters will be fitted to chiller compressors, water pumps, glycol pumps, AHU fans and blower fans at a cost of approximately £85,000, with a year on year cost saving conservative estimate of £70,000. This is an estimated return on the initial investment in just 14.5 months!

Many of the fans are fitted with dampers which are partially closed to control the air flow. By using variable speed drives to control the motor speed according to demand (PID control of air return temperature), the dampers can be fully opened and the motors run at the correct speed appropriate to demand. Other fan motors will run at permanent lower fixed speeds with no detriment to airflow. This results in a conservative estimated reduction of more than 50% of the power consumed by the fan motors.

The pumps are fitted with valves which are used to control the flow – some are closed to approximately 80% flow rate. Using inverters to control the motor speed, the valves can be opened wide and the motor speed controlled by PID control of the return fluid temperature. The motor speed will increase or decrease as required for demand. This will result in lower running speeds and therefore less power consumed. The conservative estimated energy saving is in excess of 50%.

Fitting an inverter to the Chiller Compressor motors will allow the motor speed to be reduced when the compressor is offload. The conservative estimate for energy saving on these units is at 20%. 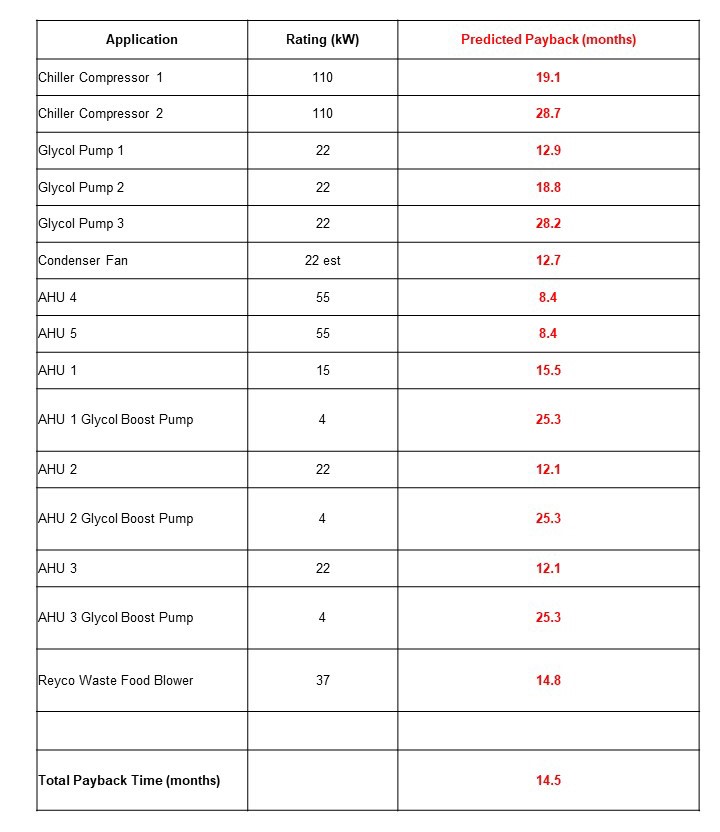 Other benefits included longer plant life due to reduction in mechanical and electrical stresses on the motors with direct online start, less maintenance and downtime of motors due to running at lower speeds, quieter running – motors run at reduced frequency and therefore vibration and motor noise is reduced.

If you would like to discover if inverters can reduce your site energy consumption and therefore costs, book an Energy Efficiency Motor Audit by calling 0115 944 1036 or email sales@inverterdrivesystems.com