A company producing extruded PVC-U profiles for double glazing product applications is using ABB’s synchronous reluctance (SynRM) motor to cut the number of motor failures on two of its main extruders. The SynRM replaced ageing servo motors, ensuring high reliability and maximum production time for the company from its extruders.

Synseal Extrusions Ltd, based in Nottinghamshire, is one of the UK’s largest PVC-U extrusion companies, producing system solutions for windows, doors, conservatory roofs and orangeries. Its Line 20 and Line 21 used servo motors that were becoming increasingly unproductive. 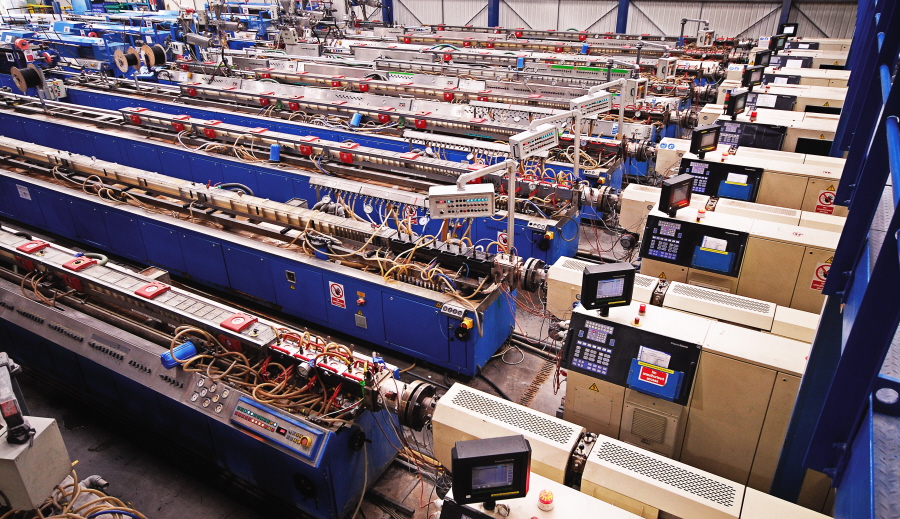 Steve Scurrell, Works Manager for Synseal, says: “The existing extruder motors were 20 years old and largely obsolete. Although we kept refurbishing them, they were lasting for shorter and shorter times between refurbishments. We knew that if we did not replace them, either could fail at any time and we would lose the use of an extruder line completely. Although we may not lose a huge number of hours, even a minor loss of production time could have a negative effect on our business productivity and this is something we would want to avoid wherever possible.”

At this time, ABB was looking for a suitable constant torque application to test its new SynRM motor. Phil Nightingale, of ABB authorised value provider Inverter Drive Systems (IDS), says: “This was a standard constant torque extruder application, which was ideal to test the capabilities of the SynRM. The servo motors were long and thin. Although they could have been replaced by normal squirrel cage motors, the SynRM motors were a better fit for the existing installation as they offer more power for their size than conventional motors.”

Says Scurrell: “We have done a lot of work with IDS over the last five years and have always received great support from them. If they were confident with the proposed solution, then we were happy to go ahead.”

Offering up to 40 percent more power density than conventional induction motors, a SynRM can be up to two frame sizes smaller than a conventional induction motor, an important benefit for machine builders who often work with stringent space restrictions or for refurbishing existing machines. It offers the high power density of an equivalent permanent magnet motor with the robustness of an asynchronous squirrel-cage motor.

Because the rotor runs cooler than other technologies, the bearings also run much cooler, making the motor much more reliable.

The 25 kW motor, together with matched ABB ACS880 drive, was installed on the extruder. IDS installed the drive, while Synseal installed the SynRM motor itself. This installation included a force vent kit, foot mount and HTL encoder.

As well as curing the reliability and obsolescence problems, the SynRM motor also cut 20 percent off the running costs of the extruder, saving £754 a year on electricity.

Adds Scurrell: “The motor and drive are now fitted as a permanent installation and we have another machine to convert to this configuration later in the year. The main benefit to us is that we now have much better availability of spare motors off the shelf and know that we can keep our extruders running.”

ABB is a leader in power and automation technologies that enable utility and industry customers to improve performance while lowering environmental impact. The ABB Group of companies operates in around 100 countries and employs about 150,000 people.