Inverter Drive Systems (IDS), in partnership with ABB, has won the Technical Innovation of the Year Product award at the Pump Industry Awards 2011 for a patented control system for primary settlement tank sludge pumps. 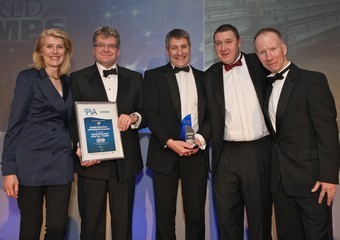 The control system is the brainchild of Blaise Ford of IDS, one of the ABB Drives Alliance members. “This shows the depth of expertise we have throughout our channel partner network,” says Ruddell. “There is nothing else in the marketplace that achieves the operational expenditure savings that this technique attains, while drawing off sludge at 4 percent solids.”

Reactive Pump Control senses the viscosity of sludge using an internal algorithm. It starts pumping on an internally set delay time and stops pumping when sludge viscosity drops to a pre-determined value.
“This award underlines ABB’s relationship with its partners and the continued commitment to innovation and to bringing pump users the most energy saving technologies on the market,” says Steve Ruddell, Division Manager, Discrete Automation and Motion, ABB Limited.

Technical Innovation Product of the Year

The award was presented to Blaise Ford, IDS, and Nick Brown, ABB, at a ceremony at the Hilton Hotel, Coventry on 23rd March, by celebrity Selina Scott and World Pumps’ editor Alan Burrows.