One of the more difficult relationships to understand with regard to applications using electric motors is that between torque, power and speed. We have all seen the data on a motor nameplate – power, current, speed in rpm and all of the rest. To get to the motor torque we have to convert them into their SI equivalents and change the scale of some of data as we can’t just use the values on the nameplate.

The formula to get to torque goes like this, Torque = Power/Speed

Torque is measured in Newton metres or Nm

For motors we always quote speed in rpm. To make the calculation work for torque we really want the angular velocity and this has to measured in radians per second rads/s. We have to do a bit of maths here to convert rpm to rads/s. To get to this we divide the rpm by 60 (to get to seconds) and multiply by 2π.

The proper SI symbol for angular velocity is ω so the formula looks like this T (Nm) =P (Watts) divided by ω (rads/s). 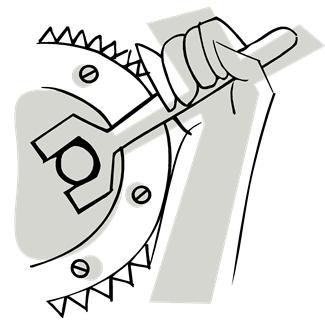 OK, so we have got the maths out of the way but what does it really mean in practice and what is torque? Well, here goes, Torque is a twisting force applied to an object, like a fan or a conveyor shaft. The amazing thing is that you don’t need any motion for torque to exist. For example, if you try to turn a rusty old nut you can heave with all your might but the nut won’t turn, you are applying lots of torque but there is no movement as the nut is rusted solid. Same thing with a tight jar lid! On the other hand if you try to turn a fan; at low speeds it is very easy but get significantly harder as the fan speeds up. However it is not so easy to turn the shaft on a conveyor or lift the load on a hoist even if it had the same size motor as the fan. This is because the motor has to produce enough torque to overcome the load torque (friction, inertia, moving parts and the load itself). Think about it, the load on a fan is just air resistance, we can all picture that the faster it goes the greater the air resistance, the load increases and the torque required to turn the load also increases. Again have a think about it, with a conveyor or a hoist the load is there all of the time and doesn’t change whatever the speed, so the torque stays pretty much the same no matter how fast it is going. These are fairly general rules, but they help us understand that in the electric motor world there are two sorts of loads. Those like a fan or a centrifugal pump are called ‘squared torque’ or ‘quadratic loads’. Most of the rest, for example conveyors, mixers, hoists and so on are called ‘constant torque’ loads.

Now the really clever bit comes; generally if you slow the motor down the power reduces. On a fan or a pump the savings can be spectacular, have a look at “Cube Law Explained” on this website for a better explanation. With other applications (the constant torque ones), if you slow them down by 10% the power reduces by 10% and so on. No quite as good as a fan or a pump but well worth looking at, especially on air compressors and hydraulic pumps.

The most effective way to control the speed of a standard AC motor is with an inverter and this is where IDS come in, so give us a call on 0115 944 1036 or email [email protected]