Severn Trent Water has cut the risk of flooding homes with sewage overflow by installing an ABB variable speed drive (VSD) within a pump control system.

The new control system is switched on if the primary programmable logic controller (PLC)-based wash water control system fails, avoiding the need to use an emergency tank which only has capacity for eight hours of incoming sewage.

The wash water is a critical part of the wastewater treatment process at Severn Trent’s Stoke Bardolph facility near Nottingham. It is used to clean the screens at the inlet works. If no wash water is available, the screens become blocked, the water level in the inlet channel rises and the inlet screw pumps turn off to prevent the screen house from flooding.

The six pumps controlling the wash water are usually controlled by a PLC, but this has suffered a number of failures over the last five years caused by the controller’s memory loss, which have led to it going offline. When this happens, no wash water is available to clean the inlet screens. The treatment process stops and sewage arriving at the site, which comes in at a flow rate of up to 4000 litres per second, needs to be stored in an emergency tank until the system can be put back into operation. 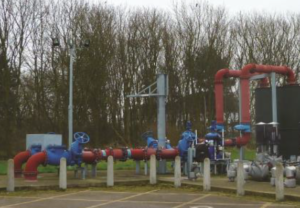 Zac Dorn, electrical and instrumentation maintenance technician for the site, says: “The PLC doesn’t take long to put back in operation but we may not get notification of a failure for some time after the event. The person with the skills and equipment to resolve the problem may also not be immediately available. It can be a particular challenge if the failure occurs at night.”

Failure to cure the PLC problem within eight hours risks the sewage storage tank overflowing, potentially inundating the homes of local residents with raw sewage. “The last failure saw the sewage tank filling to within a couple of inches of its capacity,” says Dorn. “An overflow of sewage into local residents’ homes would be very undesirable for them and cost the company large sums in compensation.”

Dorn was looking for a simple alternative system that avoided the cost of installing and programming a complete standby PLC system that might sit idle for most of the time.

The system would need to handle the essentials of the wash water control system, while leaving out some of the less crucial aspects such as control of the wash water filter’s backwash system and duty rotations.

Dorn designed a system that would act as a back up to the main PLC while it was out of service. This is based on an ABB machinery drive, ACS355, acting as a PID controller. The drive uses a watchdog relay to monitor pulses from an output on the PLC. When these pulses are not detected, because the PLC has gone offline due to a failure, the drive goes into action. It can also be switched on manually, for example when the PLC-based system is undergoing routine maintenance.

The drive controls two wash water feed pumps that pump water into a buffer tank. It monitors the level of water in the buffer tank and starts the pumps when the water level becomes too low. At the same time, it opens an inlet valve into the tank from the pump lines.

Dorn says: “I chose the ABB solution because of its compact size that fitted the restricted space we had available. I also know from long association with ABB that its products are reliable, have the functions I need and are easy to use.”

ABB (ABBN: SIX Swiss Ex) is a pioneering technology leader in electrification products, robotics and motion, industrial automation and power grids, serving customers in utilities, industry and transport & infrastructure globally. Continuing more than a 125-year history of innovation, ABB today is writing the future of industrial digitalization and driving the Energy and Fourth Industrial Revolutions. ABB operates in more than 100 countries with about 132,000 employees.