When it comes to efficiency, if you were to put a synchronous reluctance motor (SynRM) head-to-head against an equivalent induction or permanent magnet motor the former will easily come out on top. Yet, despite this and many other advantages, SynRM remains far from ubiquitous in industry. Dave Hawley, General Manager for Motors & Generators, ABB, explores five myths surrounding the technology. 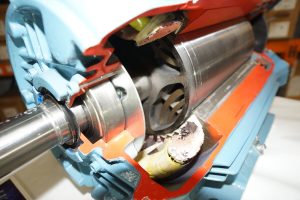 MYTH: SynRMs are only suitable for certain applications

SynRMs are compatible with almost any application, so long as a VSD is used. This includes constant torque applications where open loop (no encoder feedback) speed accuracies of 0.01 percent can be achieved. SynRMs are particularly well suited for quadratic torque applications, for example, pumps and fans. These tend to involve variable loads, meaning that the use of a drive will lead to even greater efficiency savings on top of those already gained by using an IE4 motor.

MYTH: SynRM technology may not be reliable

Commercially-viable SynRMs have been available for decades, during which time the technology has been proven time and again to offer superior efficiency to equivalent induction and permanent magnet motors. With no brush changes required and a much lower operating temperature reducing stress on bearings, the SynRM can potentially have a much longer operational life cycle with less maintenance required compared to other motor types.

MYTH: SynRMs are difficult to maintain and repair

SynRMs can be deployed on any application that can be run with a VSD and are suitable for a range of industries from water and food to mining and cement. The motor also runs much more quietly compared to its induction and permanent magnet counterparts, as there is no field being developed in the rotor. And unlike permanent magnet motors, SynRMs do not generate dangerous voltages in the terminal box when not being energised by the VSD.

MYTH: SynRM motors are too expensive

SynRM prices are now comparable to equivalent IE3 induction motors, not to mention offering either the same power from a smaller size (up to two frame sizes smaller), or more power from the same size with a 40 percent reduction in energy losses. By using the same frame sizing, rating and output, installation is simple as it’s merely a case of swapping like for like.